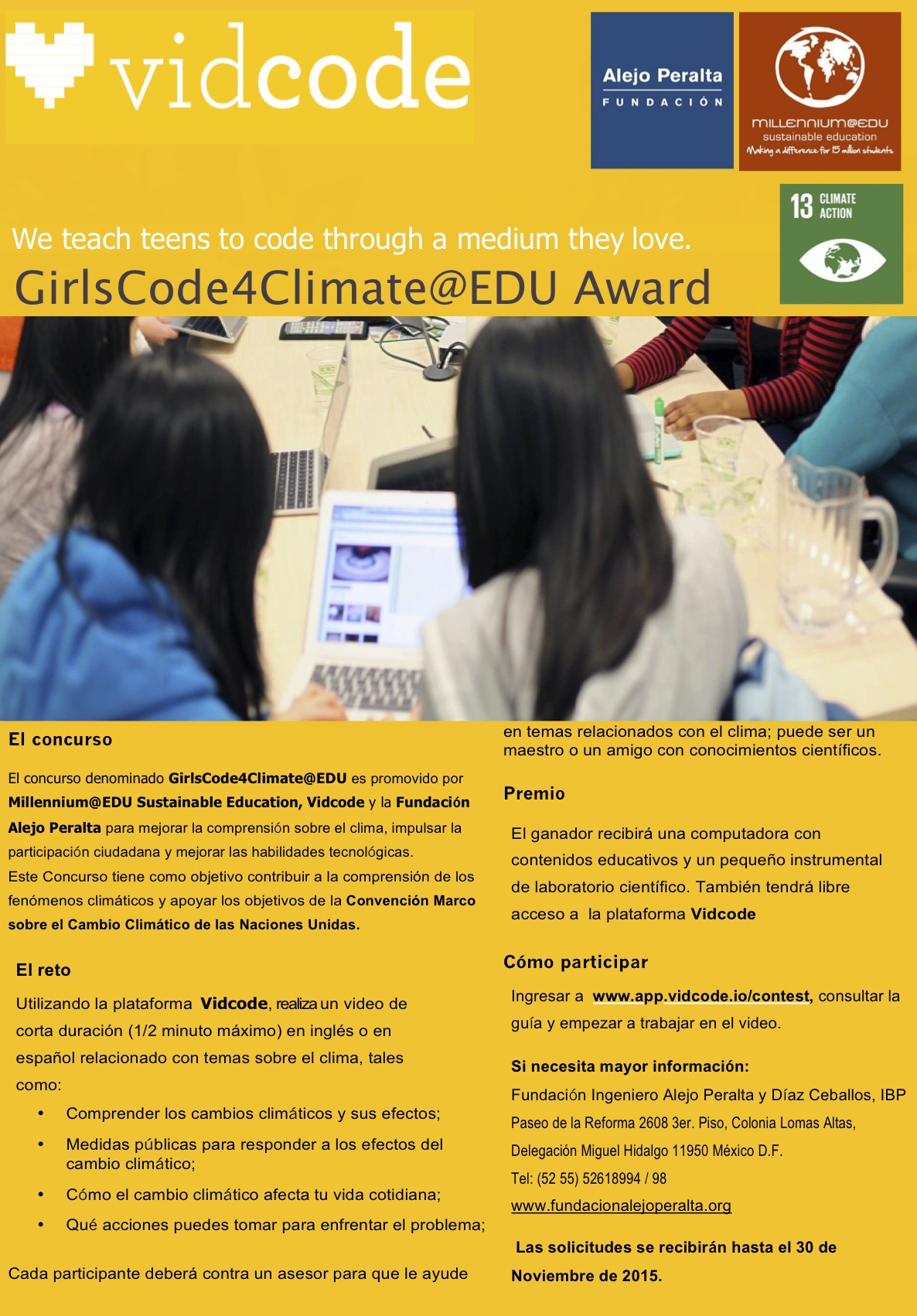 This Award aims to contribute for a better understating of Climate and matters related, as a Contribution to United Nations Framework Convention on Climate Change.

Student's videos can be about one or more of the topics below:

This contest is a great opportunity to start a discussion with your class about the Earth's changing climate. Some of the points below can be discussed and researched further as video topics!

Below is not an extensive list of the answers to these questions, but just a way to get the discussion started! Explore and have your students explore the 'References for Further Research' to learn more about each of these topics.

What are the effects of climate change?

The effects of climate change are all around us, the average temperature of the Earth rising is only one sign.

One of the signs are droughts. Droughts have been becoming longer and more extreme worldwide since the 1970's. This means less water available for drinking, watering crops and making electricity at hydroelectric dams.

Rain and snow patterns are also changing. As temperatures rise, more moisture enters the atmosphere, which means more snow and rain. This extra precipitation is not spread evenly around the globe, and some places might actually get less precipitation than they used to get. That's because climate change causes shifts in air and ocean currents, which can change weather patterns.

Melting glaciers are an effect of climate change you've probably heard about already. Glaciers are large sheets of snow and ice that are found on land all year long. Glaciers all over the world have been melting for at least the last 50 years, and the rate of melting is speeding up.

As glaciers and the giant ice sheets on Greenland and Antarctica melt, they add more water into the ocean, which causes sea level to rise.

Those rising sea levels are another important effect of climate change.

Rising sea level is a threat to people who live near the ocean. Some low-lying areas will have more frequent flooding, and very low-lying land could be submerged completely. Rising sea level can also harm important coastal ecosystems like mangrove forests and coral reefs.

What has the Public Response to Climate Change been?

Scientists are learning about climate change by taking thousands of measurements of Earth's air, water, and land every day. A scientific consensus on climate change exists.

While there is agreement that climate change exists, what to do about it is a more complicated discussion. Greenhouse emissions are tied to corporate and governmental profit, which means that they are hesitant to reduce them.

The media in the U.S. gives more air time to skeptics of global warming than other countries, who tend to show coverage consistent with the opinions of the scientific community.

How do climate changes impact your everyday life?

Climate changes impact the food that you eat every day. It could make it too hot to grow certain crops, and droughts caused by climate change could reduce the amount of water available for irrigation. Climate change is also likely to cause stronger storms and more floods, which can damage crops.

As droughts become regular occurrences, there will be less water available for everyone to use.

For example, in 2007, a major drought hit the southeastern United States. Lake Lanier, which is the main source of drinking water for the Atlanta area, was reduced to record–low water levels.

As the Earth gets warmer, plants and animals that need to live in cold places, like on mountaintops or in the Arctic, might not have a suitable place to live. If the Earth keeps getting warmer, up to one–fourth of all the plants and animals on Earth could become extinct within 100 years.

Every plant and animal plays a role in the ecosystem (for example, as a source of food, a predator, a pollinator, a source of shelter), so losing one species can affect many others.

What can you do to make a difference?

Watch your energy use

Most of the energy you use at home and at school comes from burning fossil fuels. Using less energy means burning fewer fossil fuels and putting less carbon dioxide into the atmosphere. Some electronics still use electricity even when they're turned off, these are called 'energy vampires.' Unplug energy vampires like video game consoles, cell phone chargers, and MP3 players whenever you can. Or consider buying a "smart" power strip, which automatically cuts off power when you turn off an appliance.

Buying devices that are energy efficient can use 10% to 50% less energy than their regular mode alternatives. Look for the Energy Star label on the products you buy.

Reduce. Reduce the amount of new stuff you buy. To reduce waste, buy things that have less packaging.

Reuse. Try to borrow or rent things you'll only need for a short amount of time, and reuse the things you already have. When you have things you no longer need, give them to others who can use them. Use reusable bags when you go shopping.

Recycle. Remember to recycle whatever materials you can, like bottles, cans, and paper, so they can be collected and remade into new products.

Teach your school the three R's. Schools can save energy, preserve natural resources, and prevent greenhouse gas emissions by reducing, reusing, and recycling.

Instead of recycling something or throwing it away, try to fix it! Youtube has all sorts of tutorials on how to patch products up and keep them working.

Trees help to slow climate change because they absorb carbon dioxide during photosynthesis. Trees also provide shade, which helps keep streets and houses cooler in the summertime and reduces the need for air conditioning.

The further your food travels, the more greenhouse gas emissions are produced in transporting the food from the farm to your plate. You can find locally grown food at a farmers market and even at some grocery stores.

The difference between climate and weather can be confusing. Students should be focusing on climate in their videos.

Weather reflects what happens in a short time period, for example a rainfall or snowstorm or sunny day.

Climate is the average of all that weather over a really long period of time (at least 30 years!)

Atmosphere - a mixture of nitrogen, oxygen, carbon dioxide, and other gases that surrounds the Earth. The atmosphere is critical to supporting life on Earth.

Carbon dioxide - a colorless, odorless greenhouse gas. It is produced naturally when dead animals or plants decay, and it is used by plants during photosynthesis. People are adding carbon dioxide into the atmosphere, mostly by burning fossil fuels such as coal, oil, and natural gas. This extra carbon dioxide is the main cause of climate change.

Carbon footprint - The total amount of greenhouse gases that are emitted into the atmosphere each year by a person, family, building, organization, or company. A person's carbon footprint includes greenhouse gas emissions from fuel that he or she burns directly, such as by heating a home or riding in a car. It also includes greenhouse gases that come from producing the goods or services that the person uses, including emissions from power plants that make electricity, factories that make products, and landfills where trash gets sent.

Climate change - any significant change in the measures of climate lasting for an extended period of time. In other words, climate change includes major changes in temperature, precipitation, or wind patterns, among others, that occur over several decades or longer.

Fossil fuel - A type of fuel that forms deep within the Earth. Examples of fossil fuels include coal, oil, and natural gas. Fossil fuels are created over millions of years as dead plant and animal material becomes trapped and buried in layers of rock, and heat and pressure transform this material into a fuel. All fossil fuels contain carbon, and when people burn these fuels to produce energy, they create carbon dioxide.

Global warming - an increase in temperature near the surface of the Earth. Global warming has occurred in the distant past as the result of natural causes. However, the term is most often used to refer to recent and ongoing warming caused by people's activities. Global warming leads to a bigger set of changes referred to as global climate change.

Greenhouse gases - gases that trap heat in the atmosphere causing the earth to warm. The elevated levels of greenhouse gases seen in recent decades are largely due to human activities, especially the burning of fossil fuels.

Recycle - to collect and reprocess a material so it can be used again to make a new product. An example is collecting aluminum cans, melting them, and using the aluminum to make new cans or other products.

Renewable resource - a natural resource that can be produced, regrown, or reused fast enough to keep up with how quickly it is used. Wind, tides, and solar energy, for example, are in no danger of running out and can be consumed by people virtually forever. In contrast, fossil fuels such as coal take millions of years to develop naturally and are considered nonrenewable.

Ask students to think about ways that they could spread messages about their climate through art. Maybe they sketch down ideas or create graphics, sculptures or inventions that they use as part of their videos.

An installation made up of six different ecosystems spread out along the walls of the museum's Great Hall: jungle, desert, wetlands, mountain valley, reservoir and plains. These ecosystems all have their own plants and animals, but share a single water source. As visitors change the water direction or things in each environment, other environments change. Connected Worlds hopes to promote sustainability by demonstrating how actions in one location can have consequences that reverberate across the earth.

A map that lets visitors experience lost plants and animals that have become extinct due to human actions and climate change.

Trees projected onto buildings grow along with the heartbeat of the viewers. Every time a new light tree is 'made', a real tree is planted.

Before your students start filming, they should plan out what they're going to be creating.

Choose a topic, what fact about climate do they want to share?

You can choose to record the actual video through the Vidcode interface, or from a program installed on your students' computers, such as PhotoBooth.
Go the the Contest Page. Either record your video or click the background to exit record, and upload your video with the button on the right.
Once they're happy with their video, it's time to start coding! Follow the steps on the left to go through how to edit their video with code!
Use the docs or 'reference' page for more information on how to edit their video with JavaScript, or to refer to if they get stuck!

To submit their videos, students just have to publish them. Videos are submitted to the contest automatically.
If the students choose, their videos will be displayed in a public gallery of submissions.
Winners will be notified through the email associated with the submission's account.

Vidcode is Https secure site. That means that we have secured our servers and user data to industry standards.

Contact leandra@vidcode.io  with any questions about the contest rules or lesson.

The Energy Kit also includes an App, that allows to connect the various types of sensors to the teacher and student devices, and collect, treat and share the data.